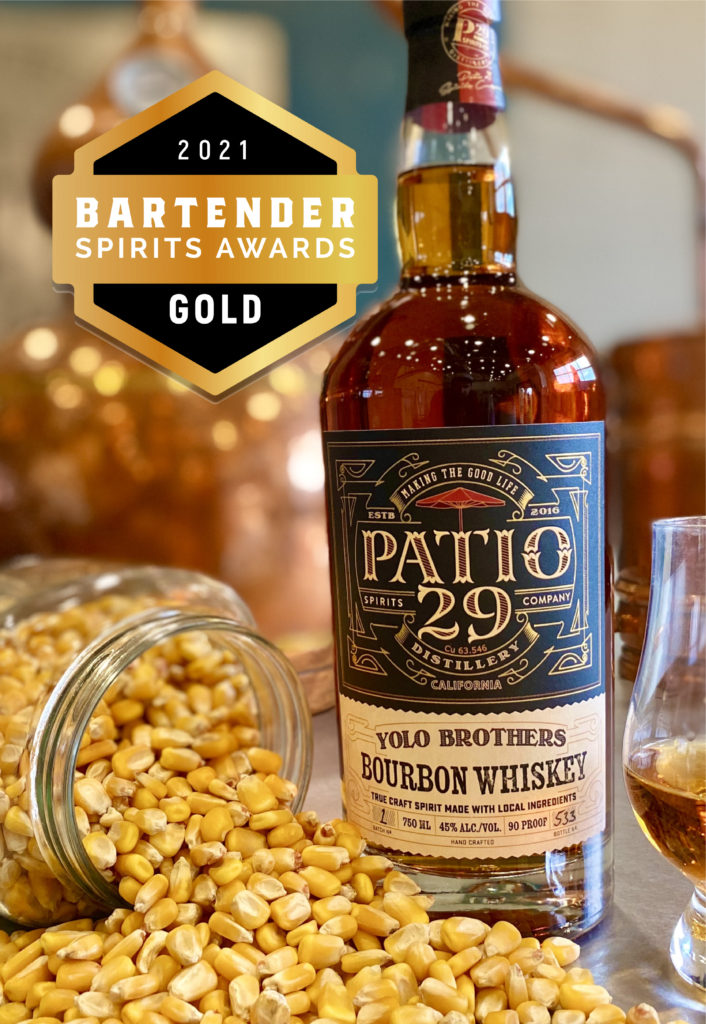 Thank you for joining us for what should be the first of many Distiller’s Updates! The hope is to give everyone a little insight into what’s going on behind the scenes here at Patio29. We’ll talk about upcoming releases, distilling knowledge, and a little bit about what makes the craft spirit industry special. So, I hope you keep tuning back in if you’re a fan of Patio29 spirits, the craft of distillation, or just learning something new about (what I think!) is a pretty interesting process.

I could ramble on and on about what we’ve been up to since we started production two years ago. But what I really want to talk about is bourbon, specifically barrel aging. And yes, bourbon can be made outside of Kentucky. In fact, bourbon is a spirit than can only be made in the United States, anywhere in the country. Mexico has mescal, Scotland has scotch, and we have bourbon.

The Tax and Trade Bureau (TTB) is the governing force which regulates what we name spirits, specifically Chapter 4 of the Beverage Alcohol Manual. This document is openly available online and is actually pretty interesting if you want to be a little more knowledgeable perusing the isles at your local liquor store. The rules for whiskey classification take up the largest portion of the 15-page document, claiming a whole 4 pages. And while there are some interesting classifications in there, we’re going to focus on one little block defining bourbon. By TTB regulation, bourbon is: “Whisky produced in the U.S. at not exceeding 80% alcohol by volume (160 proof) from a fermented mash of not less than 51 percent corn and stored at not more than 62.5% alcohol by volume (125 proof) in charred new oak containers.”

Notice how there isn’t a designation for how long bourbon has to be stored in charred new oak containers, aka barrels? Theoretically a bourbon could live in a barrel for only a day, and while it would be a vastly different product than a bourbon aged 5 or 12 years, it would still be classified as just that, bourbon.  This fact has led to many distillers asking the question: “How can I age bourbon faster?” Traditional barrel aging takes time, space, and money. For new distilleries it means they may not have a whiskey in bottles for up to two years after starting production.

Want to start a lively debate? Go to a distiller’s conference and ask “how can I age bourbon faster?” and then cancel any obligations you have for the rest of the day. You’ll hear about oak spirals, small barrels, oxygen injection, and maybe even my personal favorite, putting the barrels on boats and sending them out to sea. Standing in the face of all this optimism you’ll hear what essentially boils down to one phrase.

See, a lot of things happen in a barrel. The two main things are color and flavor extraction. Spirits go in a barrel clear, and come out the rich amber color we all love. During this time the spirit is also taking on the flavor of the barrel which initially is a strong oak taste. And both these things can be expedited. You can increase the surface area to spirit volume ratio by using small barrels or adding oak spirals. You can store the barrels in a climate that has vast temperature swings so the spirit is being pulled in and pushed out of the wood faster. Using these techniques will get someone a dark, oaky whiskey far faster than someone who doesn’t.

A strong oak flavor is the defining factor of a “young” whiskey though. It’s the more nuanced interactions between spirit and barrel, and more nuanced flavors, that truly make an exceptional bourbon. With time oxygen passes through the barrel and helps to mellow out the strong oak flavor from initial extraction. Sweet flavors like vanilla and butterscotch, imparted by the natural sugars found in oak, start to become noticeable. And the carbon created by charring the inside of the barrels acts as a filter, brightening and clarifying the spirit of any residual oils left over from the distillation process. When a distiller says “You can’t replace time,” this is what they mean. These are the variables that they say can’t be replicated.

Having said all that, we aged our first batch of bourbon in 15-gallon barrels (industry standard is 53 gallons) for a little over one year, half the time of the youngest bourbon you’ll typically find on the market. And it just won a gold medal, scoring 92 points, in the annual Bartender Spirits Awards. Our one-year bourbon was awarded the same medal as a 12-year whiskey.

This may have ended up being a little more about why the craft distilling world is special than just barrel aging (I promise we’ll take a closer look at the science and magic of barrel aging in a later post). There is a reason the quality of a whiskey is so directly correlated with its age. Distilling is an old art, and many of the practices still used in the industry were standardized because they worked, not necessarily because anyone knew why they worked. The longer you leave a spirit in the barrel, the better it gets. Consumer demand, and therefor price points, became established around this one variable before we knew why it was so important. But now we know that time isn’t really what is important, it’s the oxygen, sugar extraction, filtration and more that creates an exceptional bourbon.

“You can’t replace time.” I think we’re going to see a lot of young distilleries, due to necessity, curiosity, and a little bit of “who the hell are you to say so?” prove that statement wrong. It’s a change in the industry that wouldn’t exist, or even been discussed, if it weren’t for the new distilleries emerging across the country. And we’re fans of any change that gets an exceptional bourbon from the fields into your glass a little bit sooner.

If you made it this far, thanks for reading! It’s always more fun to talk, or write, about something I know people are interested in so if there is any aspect of distilling you want to learn more about, please let us know in the comments below.